After a fortnight of big financial news, in theory both good and bad, today Theresa May announces what we have been been predicting with increasing ferver over recent weeks and months; that the NHS is about to undergo a significant financial re-think to address growing political and professional concern that it is not only unsustainable but in fact going over a cliff. Whereas there is little question as to whether this is warranted, with change comes uncertainty and frequently we find many devils lurking in the opaque, Parlimentesque detail. This is just, or even especially, such an occasion and it is imperative that NHS leaders follow and understand what might sound sensible on the surface but rather less palatable beneath.

This is a critical point in time… for you. The NHS is about to be turned on its financial, and quite possibly structural, head and those with the simplistic notion that we’re suddenly ONLY going to get a wonderful pot of gold are going to find themselves without a seat when the music stops if they don’t start to develop the propensity to dig below the rhetoric. This juncture might have been a while coming but it is not unplanned and those plans may just not feel quite as sweet as the saccharin-coated statements that are about to explode in the media.

To be clear, I am neither being a naysayer, nor a mood hoover. I am saying that change is afoot, that much of it has been in the planning stages for many years and not all of it is palatable – it is vital to understand it though. Deeply. 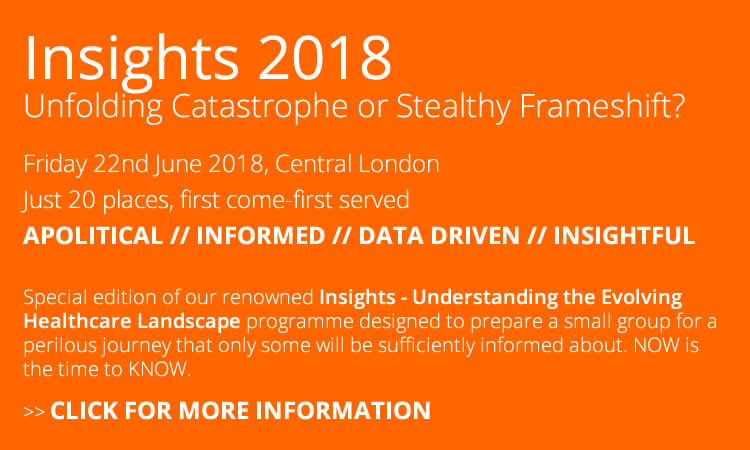 I encourage you to commence your journey of understanding by spending a few monents reading the letter prompting May’s evidence session, before spending a few minutes listening to her response.

The obvious answer is because the NHS can’t afford to wait, just as May said herself. However, we have to take what seems blindingly obvious with a political grain of salt. Just because something makes sense, it doesn’t mean it is politically palatable, nor conveniently aligned with political cycles and other events. We have to consider that May is currently facing:

This is a Conservative… leading a very public tax increase. She is also a long way off a new general election, which is scheduled for 5 May 2022 under the Fixed-term Parliaments Act 2011, unless there is a prior vote of no confidence (which the NHS itself could precipitate) or a two thirds of the seats vote in favour in the House of Commons.

To better understand why now, it is perhaps necessary to consider why not later, when she has so many confounding issues. Well, those issues are only going to worsen, leaving her in the political no mans land of having to act but not having the ability or strength to carry things through. So, what does ‘worsen’ really mean? As we discuss these, keep in mind that the plan sort of on the table is a hypothecated [pledge (money) by law to a specific purpose] tax… from the people… who did not give her a majority… and who are tired of austerity (meaning the austerity in their own pockets, not everybody elses)… voted against her over Brexit and have just marched about the NHS. Consider then:

The population are about to find themselves worse off in the pocket. If it is difficult enough to extract higher taxes without political damage, it only becomes more difficult if the very people you are extracting it from suddenly feel poorer… and unhappy about it. Essentially, it’s now, or have the NHS’s death on your hands before the next general election.

However, despite that stark reality to timing, I have been predicting this, not from the macroeconomics and politics beyond the NHS but, from the very changes and behaviours within the NHS.

For some years, I have held the view that the NHS was being concurrently steered along three different, semi-aligned paths, being:

In effect, I am describing a set of distinct policy choices to change the very nature of the NHS, by creating the conditions in which ‘something’ had to happen, engineering a responsibility shift away from the Secretary of State and onto the NHS locals and then ‘having no choice’ but to step in at a moment just like this to rescue the poor NHS. Let’s consider the outline evidence.

In national system terms, the decline has been mercifully quick. In human terms, it has felt like death by a thousand cuts, with patients suffering harm and staff under terrible conditions, whilst constantly being asked to dig deeper.

The STP process was the ultimate piece of rapid devolution of responsibility, in which a body of local leaders, with no statutory power, was literally forced to accept patch-wide accountability for literally every performance metric that had previously sat under the Secretary of State. This was a vital piece of evidence that we were nearing the end. For those that remain deluded about STP, if it was supposed to create magic transformation, ask why, collectively, STP patches have been granted just £325m of capital transformation support (and even that was split over 3 years)?

Every wondered why Jeremy Hunt seems to survive every re-shuffle? He has a job to do, it’s a dirty job, it’s not yet finished and he helped write the book on it, literally. The Treasury and DHSC have been working hard at creating conditions in which nothing short of a funding model shift can provide the degree of funding now needed. And it’s all there any Parliamentary evidence, if you know where to look. It includes:

That we were drawing near at this time was mostly starkly illustrated by the SoS’s marked recent change in behaviour, from confrontational on almost every issue to one of championing and defending the NHS – the true start of the NHS rescue, with him astride the white horse… After staunchly denying that more funding was needed, criticising just about everybody, implying that NHS staff were self-centred, money-focused change resisters, suggesting that GPs were on huge salaries, in a matter of months he has:

That’s YEARS of one set of behaviours, followed by a complete change in MONTHS. I hope nobody is naive enough to think he has suddenly woken up and smelt coffee.

Good News or Not?

At a general level, we’d have to conclude that this news is ultimately better than not having any news on this very topic. Continued existence in a state of slow death, irrespective of how demoralising it is to work in, causes major long-term damage that already may not be easy to recover from in anything less than a decade, if at all. It literally had to change. But then that was most likely the strategic endpoint that the policies were aimed at achieving.

The more accurate answer is that it depends on who you are and what you believe in. There are parts of the NHS that are likely to find themselves in what feels like a state of financial abundance – a new golden era. However, there are just as many that face an emerging environment that will require them to re-think the very definition of a successful service, if they wish to survive and thrive. It is this group that may also be first to question whether they can live with a wholly different set of fundamental principles. DHSC have probably gone as far as they can to ensure that the present isn’t remotely acceptable to anybody and thus ‘anything’ is an improvement. However, as the dust settles, it is vital that all start to consider, with open eyes, whether that ‘anything’ is ‘something’ they can live with.

When examining the policies and how they have unfolded, it appears we are on the cusp of that frame shift. There’s no doubt more money will be found but the depth of financial, structural and staffing distress leaves raising sufficient through taxation about as politically and financially likely as snow on the NHS’s 70th birthday… in July (we did have some once on 2nd June, in 1975, in case anyone was wondering). Our desperate and further declining national financial performance and the eye-watering levels of personal debt should leave nobody under any illusions.

What the NHS will be getting on its birthday is a makeover. It’s a makeover that will take the largely red-coloured hair of Aneurin Bevan (being free-at-the-point-of-delivery, universally accessible and… state-provided) and apply a distinctly blue tinge, penned by Jeremy himself. The evidence underpinning that position is all around, for those willing to understand it. It will affect the very heart and sole of the service and every individual within it.

The critical success factors will change. Interactions and relationships with patients will change. The terms of reference will be largely unrecognisable. And the unprepared professional bodies will likely line the metaphorical street, if they fall for the headlines without addressing the happenstance.

What won’t change is the spin. Just like the AfC pay award (of which our own proper analysis is surfacing that 60% of staff will receive no net pay award over the next 3 years – we kid you not… not quite the 29.9% headline come from the DHSC, is it?), it will sound lovely on the cover but that devil will be in the detail. It’s more important than ever to engage in understand the evolving NHS. We’d say it’s critical.

Then please do share it by clicking on the icons below and adding it to your social media channels.